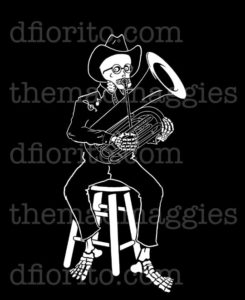 JOHNY BLOOD: tuba
childhood memory: my mother holding me upside down by my heels, shaking out a butterscotch candy that I was choking on
first musical memory: hearing “Downtown” by Petula Clark on the car radio
first gig: I played “Louie, Louie” on the tuba, the singer tossed a beer bottle
worst gig: The singer got in a fist-fight, the club shut off the power
biggest musical challenge: Not over-blowing
other instruments played/attempted: alto horn, euphonium, flugelhorn, electric bass, soprano sax, accordion, ukulele
other bands, ensembles: Along Came Jones, Blood & Stone (electric tuba duo), Magnetic Fields

When I play music I… like to have a drink on hand
After a good gig I… like to go to an after-hours polka club
So far life… so sweet, so painful, so short
Don’t make me… complete sentences
To relax I… look at stuff
important book(s): Texts for Nothing – Samuel Beckett
favorite movie(s): The Palm Beach Story
soundtrack(s): In high school: The Beatles, Eno. In college: Captain Beefheart, The Velvet Underground. In my 20s: James Brown, Phil Spector, Lamonte Young. In my 30s: Billie Holiday, Lester Young. Now: klezmer, Balkan brass band. Anytime, always: “Please Mr. Postman” by the Marvelettes 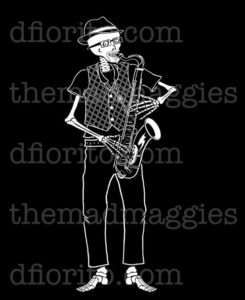 When I play music I… Sweat when appropriate
After a good gig I… Pack it up and have a beer
So far life…I’ll tell you later
Don’t make me… Just don’t!
To relax I… lie in my Hammock
influences/inspirations: Gene Ammons, B, Mel Martin, Jack Reacher
important book(s): Zorba the Greek
favorite movie(s): Godfather
soundtrack(s): Get Shorty 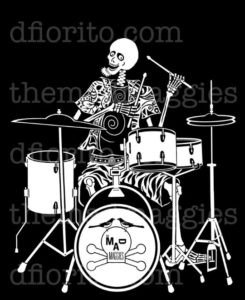 IAN LUKE: drums
childhood memory: At the age of four, being dragged around the garden of Versaille in France by a child leash. I still managed to get away and was found 30 minutes later sleeping in a flower patch.
first musical memory: Watching my dad goof around on the piano
first gig: I was 17, the band was Night Prowler. We played in front of 100+ psychiatric patients, some wearing helmets. Everything was fine until we played the Beatles’ “Day Tripper”.
worst gig: See above.
biggest musical challenge: finding the venue I’m playing at.
other instruments played/attempted: You name it, I’ve attempted it. As far as playing goes, I’m still working on it
other bands, ensembles: My project called Chocolate Starfish.

When I play music I… think of flame-engulfed Oomp Loompas rolling down a hillside singing sea shanties!
After a good gig I… try to figure out where I am.
So far life… has continued to completely confuse yet entertain me.
Don’t make me… explain myself
To relax I… try not to answer questions
influences/inspirations: Anything and everything bad
important book(s): The Exorcist Invisible Monster Shantaram
favorite movie(s): Blue Velvet, House of 1000 Corpses, Tropic
Thunder
soundtrack(s): 2001 Space Odyssey, Phantom of Paradise 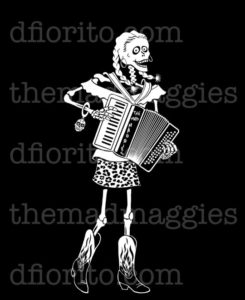 MAGGIE MARTIN: vocals, accordion
childhood memory: figuring out how to undo my diaper pins
first musical memory: listening to symphonic music playing on the radio on the nightstand as I fell asleep
first gig: around 14, playing guitar in our all girl rock band at a small hall in San Francisco
worst gig: any gig where I have to change into my stage clothes in a Porta Potty
biggest musical challenge: describing what kind of music I write
other instruments played/attempted: keyboards, harpsichord, congas, tin whistle, ukulele, scrub board, guitar
other bands, ensembles: assorted a cappella ensembles,the Anti, Mixed Company, Polkacide 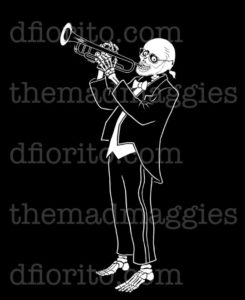 MARK NEMOYTEN: trumpet
childhood memory: fireflies on a summer evening in Ohio
first musical memory: singing in the car with my family
first gig: playing Chicago covers in high school for a dance.
worst gig: driving with a 7 piece band for 5 hours to a gig in Milwaukee, getting lost on the way, starting late and getting fired after the first set. A waitress thought our bass player was cute so she let us crash at her place.
biggest musical challenge: keeping up my chops for any style of music that I’m asked to play
other instruments played/attempted: can play recorder, flute, clarinet, sax, trombone, violin well enough to teach a beginner. attempted piano
other bands, ensembles: The Overcommitments, Starduster Orchestra, Brass West (at the California Revels), Juke Joint, Santa Rosa Symphony, Golden Gate Park Band, whoever else will hire me. 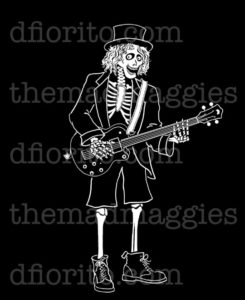 TIM SARTER: electric and upright bass guitar
childhood memory: Falling down the stairs through the gate, my recurring nightmare of having to bathe in a stairwell full of biting fish
first musical memory: family jamborees where we played a lot of Woody Guthrie’s music
first gig: some party somewhere
worst gig: getting driven in on four wheel drive vehicles to play during lunch for a trail ride. Things took a turn for the worse when one of the guys leading the trail ride proceeded to shoot himself in the foot while getting off of his horse.
biggest musical challenge: learning entire scores for plays
other instruments played/attempted: flute, piccolo, mandolin, guitar
other bands, ensembles: Miss Kitty and the Big Dogs, The Shannon Rider Band, The Hank Band, Patsy and the Bobcats, Hand Me Down, B.C. Fitzpatrick, The Burnside Scramblers, Heritage Music Theatre. Probably some I’m forgetting.

When I play music I… feel elated
After a good gig I… go home
So far life… is very interesting
Don’t make me… tell you how to do your job!
To relax I… do long distance trail running
influences/inspirations: my older brothers – they got me started playing music
important book(s): East of Eden, The Secret History, The Story of Forgetting
favorite movie(s): hmmm… not sure. I don’t see a lot of movies. I’m too busy playing.
soundtrack(s): that funny ringing in my ears that never seems to go away. 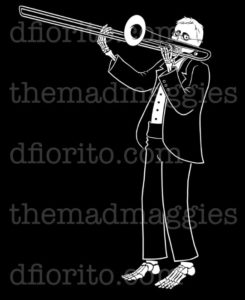 NED STONE: trombone
childhood memory: smashing my chocolate ice cream cone into the back of the white drivers seat of my parents ’68 VW at an abrupt stop.
first musical memory: scratching indentations into my favorite notes on the piano with a pair of scissors.
first gig: have no idea, it’s all a blur.
worst gig: playing Dixieland music in the lingerie department of Sears.
biggest musical challenge: getting to and finding the gig.
other instruments played/attempted: them all
other bands, ensembles: Blood and Stone, Pittsburgh Opera

When I play music I… get human.
After a good gig I… report home and carefully hang my tux.
So far life… is the best novel I’ve read.
Don’t make me… tell you what I did last week.
To relax I… walk deep into the woods.
influences/inspirations: all of those who have taken a different path and are guided by the heart.
important book(s): any poetry by Charles Simic
favorite movie(s): any movie in a theatre that has comfy seats that I can sleep in
soundtrack(s): anything random and non-melodic that takes the visual stuff to a different level. 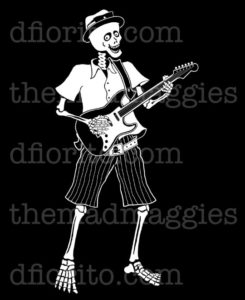 GDUB: guitars
childhood memory: age 3, found a penny and set off on a trip to the store by myself. Unfortunately, I got caught before I could spend my booty.
first musical memory: something by Boots Randolph
first gig: a friend’s keg party
worst gig: same keg party
biggest musical challenge: juggling 3 shaker eggs in 13/8 for close to 4 minutes during a theater performance.
other instruments played/attempted: ukulele, octave mandolin, banjo, congas and bongos.
other bands, ensembles, doings: GWimages (photo blog), Throws Bros (juggling), Live On Stage (acting), Mixed Company

When I play music I… try to keep my hands on my instrument.
After a good gig I… immediately remove my sweaty shirt.
So far life… has been one learning curve after the next.
Don’t make me… eat French andouillette.
To relax I… try to unravel the mechanics of unstructured time.
influences/inspirations: John Lennon, Joe Strummer, Shane MacGowan
important book(s): The Birth of Tragedy; The Brothers Karamazov; Gravity’s Rainbow
favorite movie(s): Harakiri; Network; Raging Bull; Wings of Desire
soundtrack(s): The Birds; Paris, Texas; Sid and Nancy; Until the End of the World